Tarangire National Park lies about 120 kilometers south of Arusha and is one of Africa’s unknown gems. At 2,600 square kilometres, the park is hardly the biggest in Tanzania but it is easy to access and has some of the greatest concentrations of game in Tanzania – second only to the Ngorongoro Crater. Tarangire’s open plains dotted with thousands of baobab trees truly makes for an incomparable landscape. Another attractive aspect is that there are not nearly as many tourists here as in other Tanzanian parks.

Game viewing in Tarangire is largely affected by the presence of water so during the dry season many animals congregate at the Tarangire River, the park’s permanent source of water. Tarangire is also the best place in Tanzania to see large herds of elephant (up to 300 at a time) and buffalo. In fact, the game numbers overall are staggering: 30,000 zebra, 25,000 wildebeest, 5,000 buffalo, 3,000 elephant, 2,500 Maasai giraffe and over 1,000 fringe-eared oryx (gemsbok). Predators include lion (prone to tree-climbing just like their Lake Manyara cousins), cheetah and leopard. The park is also known for its great avian diversity, in which it is surpassed only by the bird life at Lake Manyara. Birders will want to look out for the endemic ashy starling, rufous-tailed weaver and black-collared lovebird. 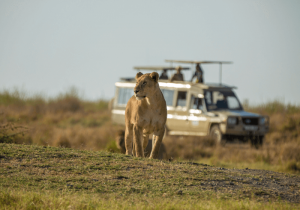 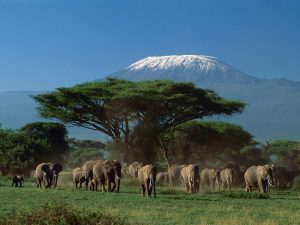