Located in the centre of the historic triangle of Bagamoyo, Pangani and Zanzibar, Saadani National Park covers 1100 km2. It is the only wildlife sanctuary in Tanzania bordering the sea. The climate is coastal, hot and humid. It offers a unique combination of both marine and mainland flora and fauna in a culturally fascinating setting. About 30 species of larger mammals are present as well as numerous reptiles and birds. Besides many species of fish, Green turtles, Humpback whales (nyangumi) and dolphins (pomboo) also occur in the ocean nearby.

Gazetted in 2005, it encompasses a preserved ecosystem including the former Saadani game reserve, the former Mkwaja ranch area, the Wami River as well as the Zaraninge Forest. Many villages exist around the boundaries of the Park. In 1969, when Saadani Game Reserve was officially created, Saadani village elders were consulted and the loss of cultivated land was compensated for. Before being included in the national park, the Zaraninge Forest was managed by the World Wide Fund for Nature (WWF) whose goal was to preserve the extremely high botanical diversity of one of the last coastal rain forests remaining in Tanzania. The Mkwaja area is the reminder of a large cattle ranch which has been run from 1952 to 2000. The presence of many dams and paddocks attest to the former existence of the ranch. 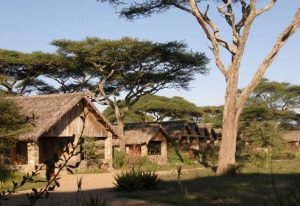