The Ngorongoro Conservation Area covers 8288 square kilometres and encompasses the volcanic area around the Ngorongoro Crater including the still active volcano of Oldonyo Lengai and the famous Olduvai Gorge. The area’s centerpiece, the Ngorongoro Crater, is the largest unbroken caldera in the world and it is truly breathtaking. The floor of the crater is only 100 square miles but it delineates a microcosm that is home to around 30,000 animals including a high concentration of predators.

The crater supports up to 25,000 large mammals and grazers dominate: the zebra, wildebeest (accounting for almost half the animals) gazelle, buffalo, eland, hartebeest and wart hog. Giraffe, however, stay away because there is insufficient food at tree level and topi antelope do because they compete directly with wildebeest. An odd feature of the crater elephants is that they are almost exclusively bulls. Breeding herds (a large numbers of females and young with a few attendant older males) are probably unable to find sufficient quality food in the crater.

Ngorongoro has carnivores in quantity, drawn by the large herds of prey animals. It has an extremely high density of large predators: mainly lion (about 100) and more than 400 spotted hyena living in eight clans of up to eighty individuals. Both lions and hyenas will scavenge from each other depending on weight of numbers and of course, hunger. Most of the bird wildlife in Ngorongoro is seasonal. Also influencing the variety of bird species on display is the ratio of soda water to fresh water – soda water has the largest expanse of water on the crater floor, Lake Magadi. The lake is alkaline due to deposits of volcanic ash thrown out by surrounding volcanoes. 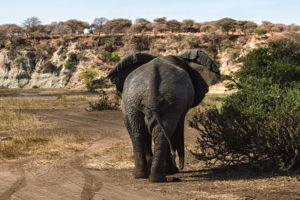 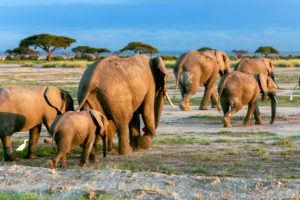