Lake Manyara National Park is one of the smallest but also one of the most ecologically diverse game reserves in Tanzania. In many ways the tall trees surounding the ground forest resembles a tropical rainforest with its verdant foliage and variety of bird life. The difference here is that these trees are supported by a water supply from underneath rather than by abundant rainfall. Following the formation of the Rift Valley, streams cascaded down its rocky walls and because there was no outlet a lake was formed. Manyara was at its largest about a quarter of a million years ago and today the average area of the lake is around 390 square kilometres; it varies from year to year.

The lake harbours abundant aquatic life ranging from pink flamingos to elegant pelicans. The hippos are commandingly noticeable in the inlets of various rivers and streams that feed the lake with fresh water. At the far southern end of the park are some hot springs, remnants of the vulcanicity the region went through, about a million years ago. The tree-climbing lions of Manyara are extremely popular and they are known to take up their positions particularly during the dry season, on the low-lying branches of the dominant umbrella acacias. 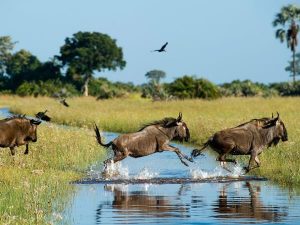 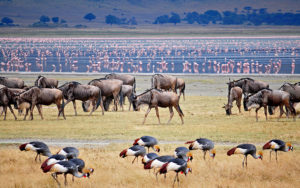